The IEG is pleased to announce that it will be hosting the 14th Annual European Elasmobranch Association Conference in Galway, 10th-13th November 2010. This international conference is a key feature on the EEA calendar and an opportunity to showcase the elasmobranch research currrently being undertaken in Ireland, Europe and further afield.

This is the first time the EEA conference has been held in Ireland and we look forward to giving you a warm welcome to Galway. For further information check out EEA 2010. More information will be added regularly.

New design of the species-list: 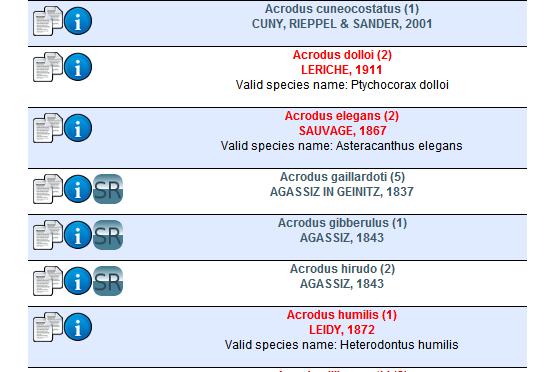 New design of the bibliography-list: 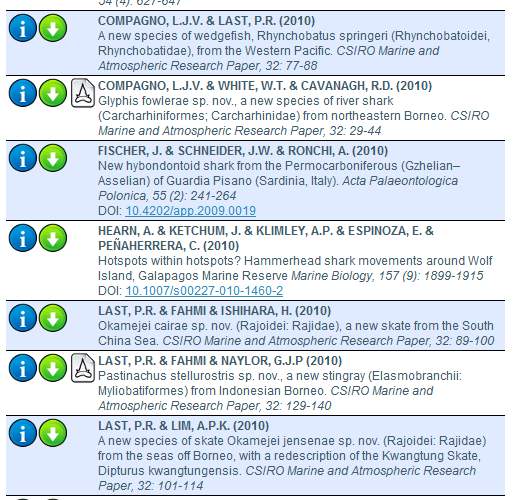 The newly designed search consists of five individually selectable modules (see screenshot 1).
Each module can be enabled or disabled with the button an the left side.
In the following example have this modules been selected: 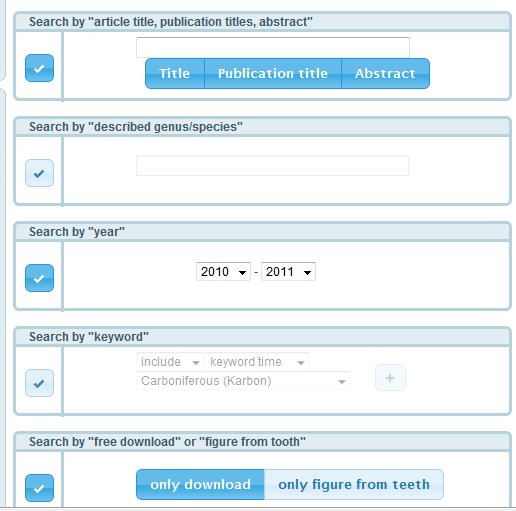 At the module "Search by keyword" you have to confirm the selected items with the “PLUS button”.

With the "x" button you can delete the terms (see screenshot 2 and 3).

Now it is also possible to search in actually more than 1500 abstracts!

Whale Sharks May Produce Many Litters from One Mating, Paternity Test Shows

ScienceDaily (Aug. 31, 2010) — How do female whale sharks meet their perfect mates and go on to produce offspring? While little is known about the reproductive behavior of these ocean-roaming giants, a newly published analysis led by University of Illinois at Chicago biologist Jennifer Schmidt reveals new details about the mating habits of this elusive, difficult-to-study fish.

Schmidt, a UIC associate professor of biological sciences, determined paternity of 29 frozen embryos saved from a female whale shark caught off the coast of Taiwan in 1995. The embryos, studied in collaboration with Professor Shoou-Jeng Joung at the National Taiwan Ocean University, are extremely rare.

The pregnant shark carried a surprisingly large number of embryos -- 304 -- still in the uterus and representing a spectrum of age and development stages ranging from being still egg-encased to developed, near-term animals.

Schmidt and her colleagues spent several years developing DNA genetic markers to study whale sharks, initially for population genetics, but in this study the tool was used to determine paternity.

Shark reproduction is still an emerging science, but what is known suggests that most broods are sired by more than one male. That is not what Schmidt found with this particular female whale shark.

"These differently aged embryos -- itself unusual across animal species -- had the same father," Schmidt said. "We have to be very cautious in drawing conclusions from a single litter, but the data suggest female whale sharks store sperm after a single mating event, and subsequently fertilize their own eggs as they are produced."

If the finding can be supported from analysis of other whale shark litters, Schmidt said, "it would suggest that there is no whale shark breeding ground where large numbers of animals meet to mate, but rather that mating occurs as an isolated event."

Follow-up studies may be serendipity. International protocols protect whale sharks from capture, few are housed in aquariums, and those that are are usually less than 25 years old and not yet sexually mature. Scientists typically study whale sharks at seasonal feeding grounds, but those animals are usually juveniles not mature enough to breed. Rarely are adult females observed in the wild.

"Protections for whale sharks have increased in many parts of the world, yet shark numbers seem to be declining, and the average size is getting smaller," said Mark Meekan, principal research scientist with the Australian Institute of Marine Sciences.

"This is a classic sign of overfishing, where larger, more valuable animals are selectively removed," he said. "Targeted fishing of breeding-age animals in a late-maturing species can be devastating for its survival."

The findings are reported in the journal Endangered Species Research, published online Aug. 4. Other authors include Meekan; Joung and Chien-Chi Chen of the National Taiwan Ocean University; Saad I. Sheikh, formerly of UIC; and Bradley Norman of ECOCEAN Inc.

The work was funded by a grant from Project Aware.

The above story is reprinted (with editorial adaptations by ScienceDaily staff) from materials provided by University of Illinois at Chicago.

ScienceDaily (Sep. 8, 2010) — NOAA's Fisheries Service has designated the eastern North Pacific basking shark, a "species of concern" because it has suffered a dramatic decline in population despite decreasing fishing pressure. The label "species of concern" may be given to a species when there are concerns regarding the population status.

The eastern Pacific basking shark is not being considered for listing pursuant to the Endangered Species Act, rather it is a species of concern because it has been over fished and its population has apparently not responded to conservation measures implemented to address fishing pressure. We expect that by identifying it as a species of concern we will raise public awareness of the species status, generate interest in additional research to identify factors that may be inhibiting its recovery and, with states and other partners, restore this population before listing under the ESA becomes necessary.

Basking sharks are filter feeders that exist throughout the world's oceans from the tropics to the Arctic, although they are most commonly found in temperate coastal waters where currents converge and plankton, their main food source, concentrate. The eastern North Pacific population of basking sharks is thought to be a single group that migrates seasonally along the West Coast from Canada to Central California.

Until the 1950s, commercial fishermen in California targeted the sharks primarily for fishmeal and fish oil, and Canadian fishermen targeted them until the 1970s, in response to an eradication program that sought to reduce interactions between the sharks and salmon fishing nets. Although there has been no commercial fishing pressure for decades, scientists are worried about the eastern North Pacific population of basking sharks, whose numbers have not rebounded. While hundreds, and even thousands, of fish were once observed together, no group larger than three has been reported seen since 1993.

The species is also still vulnerable to human impacts even though it is no longer actively targeted in the United States and Canada. Fishermen may inadvertently catch the shark while fishing for another species, or it may become entangled in commercial fishing gear or hit by vessels as it feeds near the surface.

In U.S. federal waters of the Pacific, sharks caught incidentally must be released immediately, and the state of California has likewise banned the retention of basking sharks. In Canada, the Species at Risk Act makes it illegal to take, harass, or destroy habitat for basking sharks there. The species is also listed on the International Union for the Conservation of Nature (IUCN) Red List as endangered. Basking sharks may still be caught in some countries where they command a high price for their fins in shark fin soup.

The above story is reprinted (with editorial adaptations by ScienceDaily staff) from materials provided by NOAA National Marine Fisheries Service, via EurekAlert!, a service of AAAS.

A basking sharks feeds in the Irish Sea off the Isle of Man. (Credit: Dr. Greg Skomal)