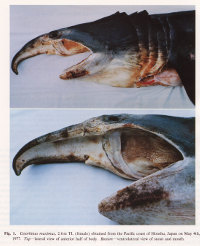 The snout anterior to the mouth is somewhat longer than the jaw, measured on a horizontal line. It is wider than high, gradually narrowing anteriorly and curving ventrally. The ventral surface of the snout is widely concaved, forming a remarkable longitudinal groove leading to the mouth (Fig. 1). This form of snout in a small juvenile is considered to be realistic, rather than referable to distortion or shrinkage, as it showed no noticeable changes since capture of the specimen 16 years previously. The snout is supported throughout its length by rostral cartilages from the neurocranium and contains flabby ampullary tissue around the cartilages, especially in the proximal dorso-lateral portion. 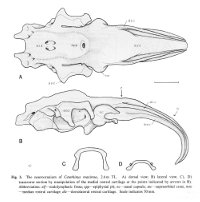 Pavesi (1874, pl. 2, figs. 1, figs. 2) described the neurocranium of a 2.95 m specimen obtained from the Mediterranean, in which the median rostral cartilage was bent backward like a bow, probably resulting from the snout tip being drawn toward the base of the neurocranium by proportionally shortened dorsolateral cartilages, as illustrated in Figure 4. Such a condition of the rostral cartilages explains the snout shape found in 3-4 m specimens, in which the snout is stout and ends in a dorsally pointed prominence. Examples of this form of snout have been given by de Capello (1870, 3.82 m), Pavesi (1874, uncertain length, 2.95 m; 1878, 2.76 m, 3.25 m), Gervais and Gervais (1876, 3.65 m), Carazzi (1904, 3.37 m), de Buen (1925, 3.35 m?), Barnard (1925, 3.36 m), Bigelow and Schroeder (1948, 3.66 m), Matthews and Parker (1950, probably ca. 3 m), and Matthews (1962, uncertain length). These specimens were presumably fish of the year, considering that a length of 4.0 m is obtained in the first year after birth, according to Parker and Boeseman's growth curve. It seems certain that the snout shape alters with growth, as mentioned by Bigelow and Schroeder (1948). Although the last-mentioned authors stated that the snout of their 3.66 m specimen was the juvenile form, it can be strictly regarded as already transitional toward the adult type. It may be safely said that the snout changes its shape and relative length rapidly during the year after birth. The condition of the rostral cartilages described by Pavesi (1874) from a 2.95 m specimen hints at the mechanism producing a rapid change in snout shape with growth. Namely, the rapid morphological change is produced initially by allometric growth between the median rostral cartilage and the rod-like dorsolateral cartilages, followed by a gradual decrease in the relative length of the snout owing to allometric growth between the rostral cartilages as a whole and the rest of the body. A decrease in the proportional length of the snout with growth is referred to above.
There are no previously published references to the ventral groove under the snout. A photograph of a young basking shark caught in Portobello, English Channel, in June 1950, was included in Matthews and Parker (1950, pl. 8). Apparent traces of the ventral groove can be seen in the photograph, although the authors made no mention of it. The fish length was estimated from the photograph as 2.1 -2.4 m, but is in fact believed to have been about 3 m. judging from the snout shape. The ventral groove had disappeared in individuals a little larger than the present specimen, according to the following figures; Pavesi (1874, pl. 1, fig. 3 [2.95 m]). Pavesi (1878, pl. 3, fig. 3 [3.25 m]), Carazzi (1904, fig. 1 [3.37 m]), Gervais and Gervais (1876, pl. 13, figs. 2, 3 [3,65 m]), Gudger (1935, fig. 3 [4.36 m]) and Matthews (1962, photograph of a basking shark of uncertain length). Furthermore, the ventral groove had disappeared completely from the median rostral cartilage in an 8.53 m specimen studied by Barnard (1937, fig. 1), in which the median rostral cartilage was very stout, being almost as wide as long, and had the ventral side almost flattened, although slightly depressed.
Considering the functional implications of the juvenile snout, it seems clear that newly-born basking sharks have a long snout with a ventral groove similar to the present 2.6 m specimen. Yano (1978) has speculated that its function is connected with oophagy (following observation of the same specimen dealt with here). In addition, a second function is possible. The flap-like juvenile snout with a ventral groove would assist feeding in the early, free-living young in respect to increasing the water current into the mouth and/or feeding efficiency, compensating for a presumably lesser ability to swim and feed. Photographs of a feeding basking shark in Hallacher (1977, fig. 1) show that when the fish swims with the mouth fully open, the snout receives water directly on to the ventral side, owing to the axis of the snout and head being somewhat upwardly directed. The ventral groove on the juvenile snout would clearly enhance such a feeding attitude. 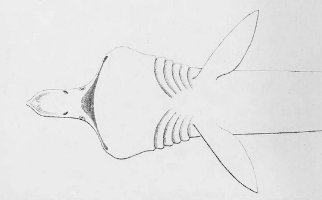 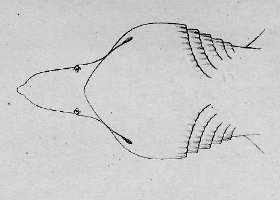 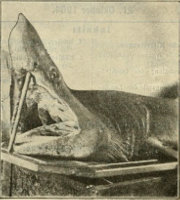