This species is distinguished especially by the structure of its skin, which is finely
granulated, the granules being serially arranged on the tail, where they appear rather in
the form of minute spinelets than in that of granules. The space between the nostrils
and the median line of the lower side of the snout, the circumference of the mouth, the
base of the fins, and the back of the tail, are naked The snout is much produced, the
symphysis of the lower jaw being midway between the end of the snout and the root of
the pectoral; snout very obtuse in front, with the front nostril opening forward. The
first dorsal fin shorter than the second, midway between the second and the spiracle.
Second dorsal spine three times the size of the first, not much lower than the fin. The
length of the base of the second dorsal is one-third of the distance between the two fins.
Pectoral truncated behind, extending backwards nearly to the first dorsal. Ventral
extending to below the middle of the second dorsal. Black; hind margins of all the fins
white. South-west coast of South America. Length of specimen (male), 10 1/2 inches.
Station 305; 120 fathoms. 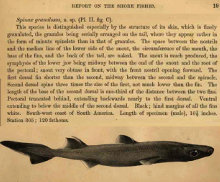