The observed teeth of the adult male and female M. asterias (KBIN 26724, Plate 5; KBIN 26723, Plate 7) as well as the juvenile female (KBIN 26722, Plate 6) possess multiple similar characteristics. Hence, these teeth are both sexually and ontogenetically rather homodont. Adult teeth often show deep scratches and grooves on the occlusal crown face, suggesting harder shelled prey. Furthermore, the jaws have a crushing type design, with teeth arranged in a pavement-like pattern. Both upper and lower jaws show a gradual monognathic heterodonty. Teeth in the proximity of the median tooth file are more symmetrical and often show a width-height ratio that is close to ca 1:1. This changes in anterolateral and lateral teeth, which are often asymmetrical and display a width-height ratio in excess of ca 2:1. The roots are holaulacorhizid in nature. A slight dignathic heterodonty can be observed in that upper jaw teeth are generally slightly smaller in size compared to their lower jaw counterparts. The transverse crest in upper jaw teeth seems slightly more inclined to form a main cusp, which is never fully present, whereas in lower jaw teeth the transverse crest is more elongated and flattened.

An important observation is the presence of two forms of crown ornamentation on all teeth. Firstly, the crowns show faint vertical ridges on both the lingual and labial basal crown faces, with a more regular spacing on the labial crown face. These vertical ridges never extend much further than halfway up the crown. The second type of ornamentation consists of reticulate pitting which is restricted to the basal crown face. It is marginally present on the labial side, but often omnipresent on the lingual side.

These teeth are symmetrical in appearance. Lower jaw teeth are slightly wider than they are high, whereas in upper jaw teeth this ratio is more proportionate. The occlusal crown face is smooth. A narrow lingual median uvula is present, accompanied by basal notches on the mesial and distal sides of the uvula. The lingual and labial crown faces show both types of ornamentation, but less pronounced compared to other tooth positions. A transverse crest is present but never develops into a distinct main cusp. A basal depression forms a clear distinction between crown and root, especially visible on the lingual side, forming a clear transition where the two neighbouring teeth interlock. On the labial side this is less visible due to the distinct labial visor of the crown which overhangs the root. A lingual visor is also present but less distinct. The root shows a clear nutrient groove with a large central pore. Small foramina are present on the basal face of the root. On the lingual root face, one to three foramina can be observed whereas on the labial root face foramina can be present but are less pronounced.

These teeth are more asymmetrical with the mesial side often being more prolonged compared to the distal side. This distinction is most visible on the lingual crown face. Mesio-distally, these teeth are elongated whereas labio-lingually they are compressed, resulting in teeth that are wider than they are high. The occlusal crown face is smooth. A wide, bulbous and robust median uvula is present, which is often distally inclined but becomes more variable and less pronounced in posterior positions. Both types of basal ornamentation are present. The vertical ridges are more pronounced on the labial crown face, whereas the reticulate pitting is most visible on the lingual crown face. The ornamentation extends higher towards the apex compared to more median teeth—especially on the lingual side—, but never reaches the transverse crest. The latter does not develop into a clear cusp, resulting in a broad, slightly curved appearance of the apex. A basal depression beneath the crown is also present. A visor is present, both on the labial and lingual crown face but it is more developed on the labial side where the crown clearly overhangs the root. Two root lobes are clearly defined by a deep nutrient groove containing a central foramen. The root lobes are distally inclined in more anterolateral and lateral positions, but seem more symmetrical in posterior teeth. Multiple large foramina are present on both sides of the nutrient groove. In contrast to more median teeth, these foramina are pronounced on the labial side of the root as well. The basal face of the root shows small foramina. 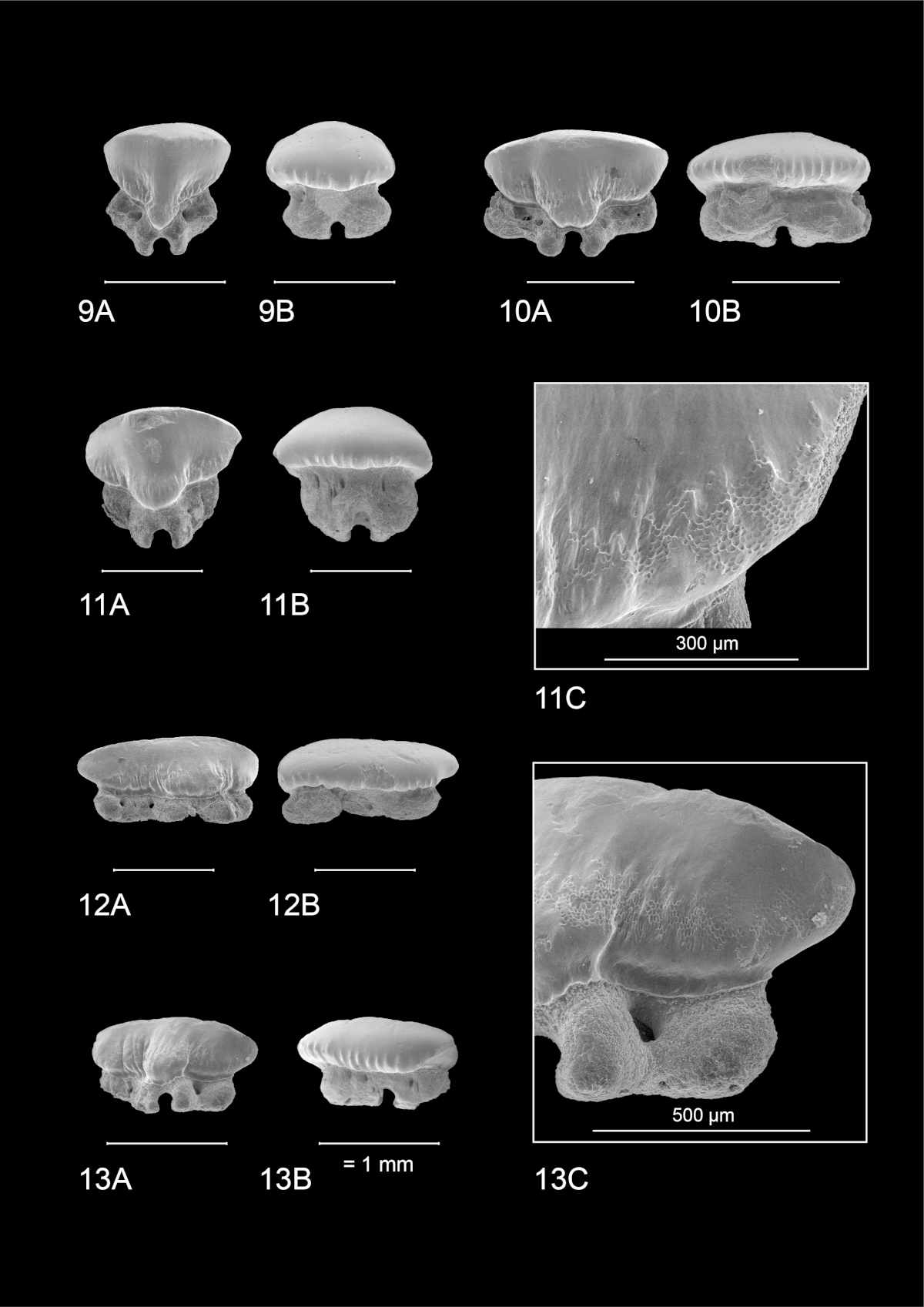 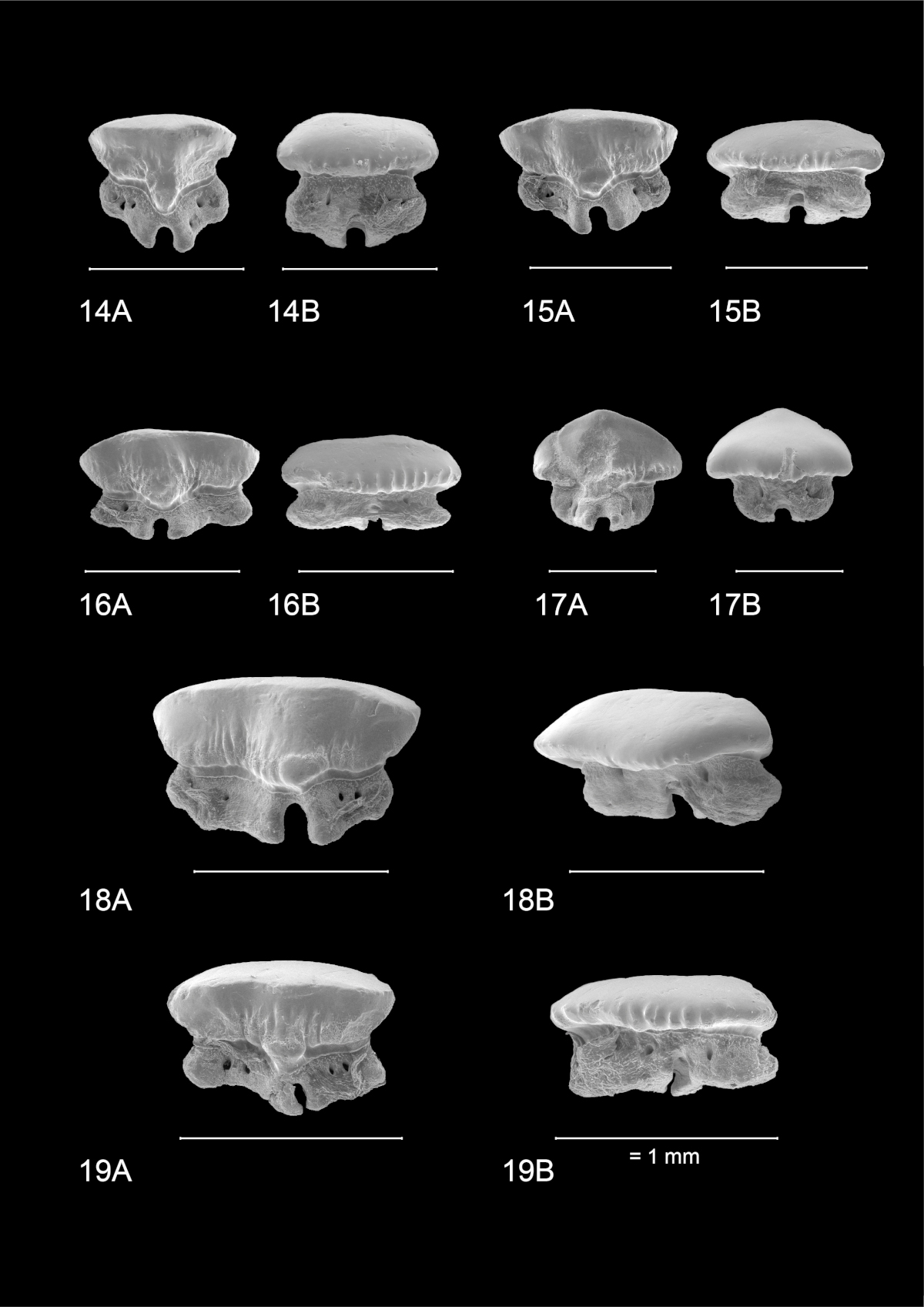