Please send your images of "Etmopterus lucifer" to info@shark-references.com


Short Description
Dark grey (Ref. 6577) or brown dorsally, black ventrally, with a distinct black streak above and behind pelvic fins; fins lighter; belly luminous [578]. Small and slender with a moderately elongate caudal peduncle and with flank denticles mostly arranged in regular rows. The base of the pelvic flank marking is under the second dorsal-fin spine, the anterior branch is usually longer than the posterior branch, and the caudal marking is considerably longer than the precaudal marking [1388].


Biology
Presumably ovoviviparous [1388]. Size at birth about 15 cm [1388]. Distinct pairing with embrace [17086]. Found on the outer continental and insular shelves and upper slopes [518] (Ref. 75154). Benthopelagic at 183-823 m [17640]. Its luminescent belly may attract prey [578], which consists mainly of squid (reported to bite squid bigger than itself), small bony fishes, and shrimps [518]. Often caught in large schools which may suggest that the luminescence may also be used to keep the group together in the dark deep ocean [578]. Feeds om myctophids and cephalopods (Ref. 58748).


Dentition
Descripion: Teeth small, compressed, and each of those in the upper jaw with two sharp basal cups [3005]; Teeth of Etmopterus abernethyi (synonym of E. lucifer): Teeth 11-1-11/18-17 in the male of 338 mm, 10-1-11/16-15 in the female of 278 mm, dissimilar in the two jaws. The upper teeth erect, multi-cusped, each with a long, sharply-pointed, awl-shaped, smooth-edged major cusp flanked on each side by one or two lesser cusps, and borne on a longitudinally-striated base. Most of the upper teeth have two lesser cusps on each side of the major cusp, with the outer cusp of these two very much smaller than the inner which is one-third to one-half of the length of the major cusp. The teeth towards the angle of the jaw have only one or no lesser cusps on each side. Three series of upper teeth functional at the centre of the jaw, two towards the angles. The lower teeth blade-like, each with a smooth-faced, subreetangular, laterally-rounded base, bearing a single, smooth-edged triangular cusp. Each cusp is sharply notched laterally, very strongly oblique, and overlaps the adjacent cusp so that an almost continuous cutting edge is formed. There is no median tooth, and the base of the first tooth on the left side overlaps that of the first tooth on the right. A single series of lower teeth functional [2751]; 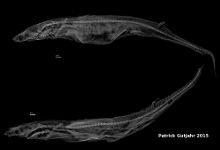