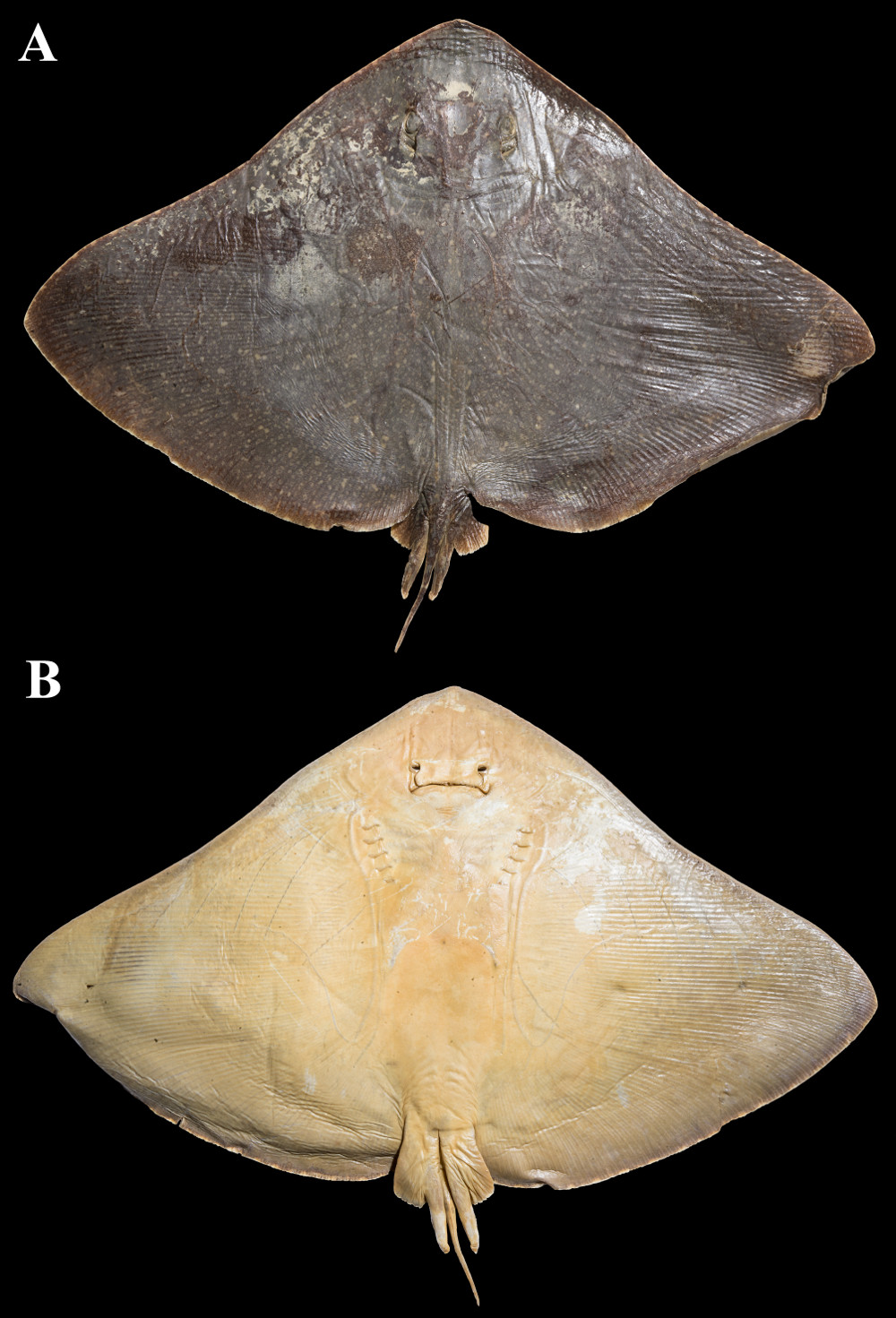 
Short Description
Original diagnose after YOKOTA & DE CARVALHO, 2017 [25819]: A medium size butterfly ray occurring in the central and northwestern Atlantic Ocean. Gymnura lessae, sp. nov. may be distinguished from other species of butterfly rays (except G. micrura and G. sereti, sp. nov.) by the combination of the following characters: absence of spiracular tentacle, caudal stings, and dorsal fin; tail relatively short (mean post-cloacal length 19% DW) and prominently banded, presenting 3 to 5 black bands that may be less distinct in large adults. Gymnura lessae, sp. nov. may be distinguished from G. micrura and G. sereti, sp. nov. by the dorsal contour of its hyomandibula with a conspicuous proximal protuberance followed by a inconspicuous distal protuberance (vs. dorsal contour of hyomandibula with two conspicuous protuberances); projection of the anteroventral fenestra on the floor of the coracoid bar taking the form of a funnel with relatively narrower opening and end (in G. micrura this projection takes the shape of a funnel with large opening and closing; in G. sereti, sp. nov. the funnel has a large opening, but presents an abrupt tapering at its half length, with the end of the funnel relatively narrow), and higher number of pectoral radials (ranges 118–127 vs. 112–119 in G. micrura and 109–115 in G. sereti, sp. nov.). Gymnura lessae, sp. nov. may be further distinguished from G. sereti, sp. nov. by the following characters: clasper of mature males more slender and longer, Lclasper 9.4–14.3% DW (vs. clasper stouter and shorter, Lclasper 6.8–9.2% DW); cranial fontanelle U-shaped (vs. keyhole-shaped); mesopterygium divided into one anterior solid element and 5–7 smaller fragments (vs. mesopterygium divided into two solid elements); distance between anteroventral and posteroventral fenestrae of scapulocoracoid representing 35–40% of scapulocoracoid length (vs. distance between AVF and PVF about 20% of scapulocoracoid length); lateral projection of the base of synarcual starting at its anterior third (vs. lateral projection of the base of synarcual starting at its half length); lower number of diplospondylous vertebrae (means 97 vs. 110), and higher number of radials in the mesopterygial fragments compared to the second mesopterygial element of G. sereti, sp. nov. (ranges 14–19 vs. 10–15). Gymnura lessae, sp. nov. is most similar to G. micrura, and may be further differentiated from it by its brownish dorsal side with a vermiculate background (vs. dorsal side usually uniformly brown or gray without any vermiculate pattern).


Habitat
marine; demersal species, living along the coast on sandy and muddy bottoms [25819]


Dentition
Small, numerous and closely crowded teeth in bands; teeth similar to teeth in G. micrura, with one medial, pointed cusp directed towards inside of mouth and the base somewhat expanded, entirely twisted in opposite direction; in labial face, tooth resembling a three-armed boomerang; teeth similar between jaws and sexes, their number increasing with growth [25819] 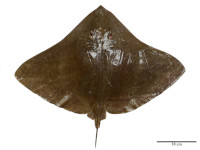