Whiteaves, J.F. (1889)
On some Cretaceous fossils from British Columbia, the North West Territory and Manitoba. Contributions to Canadian Palaeontology, 1(2): 151–196, pl. 26 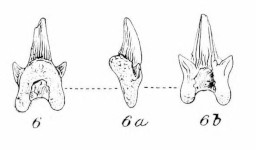 
No image available.
Please send your images of "Lamna manitobensis" to
info@shark-references.com

Remarks
Original diagnose after Whiteaves (1889) p. 192-194 [2542]: Perhaps a variety of Lama macrorhiza, Cope. Teeth rather small; crown or enamelled portion of each tooth consisting of a central and nearly equilateral cup or cone, with one well developed denticle on each side of its base: root deeply but narrowly and not at all angularly forked, the two radicles being nearly parallel and but slightly divergent, with their ends narrowly rounded. Central cusp of the crown slightly recurved, conical and rather slender, its height, as measured on the longer and flatter of the two sides, being more than twice its breadth at the base, which latter, as viewed edgeways, is oblique, the plane face descending far below the convex. Outer coronal face nearly flat, but marked with a shallow longitudinal depression or faint groove on each side, next to the lateral margins, the intervening central space being nearly flat or very slightly convex, — but its basal portion is ornamented also with a few acute and longitudinal plications of unequal size and length, the two nearest to the centre being longer and larger than any of the others. Inner coronal face convex, especially below, the greater part of its surface marked by numerous (about sixteen; irregular and longitudinal, but not quite straight, acute ridges or plications, some of which are comparatively short and do not extend the whole length of the cusp, while those that do usually bifurcate or trifurcate at the base. When examined with a lens, however, this plicated area is seen to be bordered with a narrow, smooth space, on both sides and next to the lateral margins. Cutting edge thin and sharp, with a minute tubercle at the base, on each side. The lateral denticles are triangular, with their apices slightly divergent and pointing upward and outward their height and breadth are about equal. On their outer side they are nearly flat and on their inner convex, while the ornamentation on both sides of the surface is essentially similar to that of the central cusp of the crown, though the plications on their inner or convex side, while equally well marked, are of course not nearly so numerous. The root also is nearly flat on its outer side, but on its inner face it is everywhere more or less convex, and immediately under the base of the central cusp it swells up into an elevated protuberance with a rounded summit. The foregoing description is based upon two nearly perfect detached teeth collected by Mr. Tyrrell, in 1887, at Rolling River, two miles above Heart Hill, from the Niobrara group or upper portion of the series. The dimensions of one of these specimens, which is figured on Plate 26, are as follows entire height, from the base of one of the radicles to the summit of the central cusp, eighteen millimeters; breadth of the tooth, near the base of the root and below the two denticles, nine mm. and a half; height of central cusp, ten mm. and a half on the outer or flattened side and seven mm. and a half on the inner; breadth of the same at the base, four mm. and a half. A few dental crowns of similar teeth were collected by Mv. Tyrell in the same year at the Rolling River, in Township 36, Range 26 W., but only one of these has the lateral denticles preserved. In this latter specimen, whose inner or convex surface is buried in the matrix, the central cusp is exceptionately long and slender, and the plications at the base of its outer surface are unusually short, small and nearly uniform in size. The detached teeth for which the present provisional name is proposed, seem to differ from those of the L. macrorhiza, from the "Niobiara epoch" of Kansas, in their proportionately broader and shorter dental crowns, in their very slightly divergent and nearly horseshoeshaped roots, and more particularly in the distinctly though minutely plicated surface of their inner coronal faces.

Hay, O.P. (1902)
Bibliography and catalogue of the fossil Vertebrata of North America. Bulletin of the United States Geological and Geographical Survey of the Territories, 179: 1–868

Whiteaves, J.F. (1889)
On some Cretaceous fossils from British Columbia, the North West Territory and Manitoba. Contributions to Canadian Palaeontology, 1(2): 151–196, pl. 26