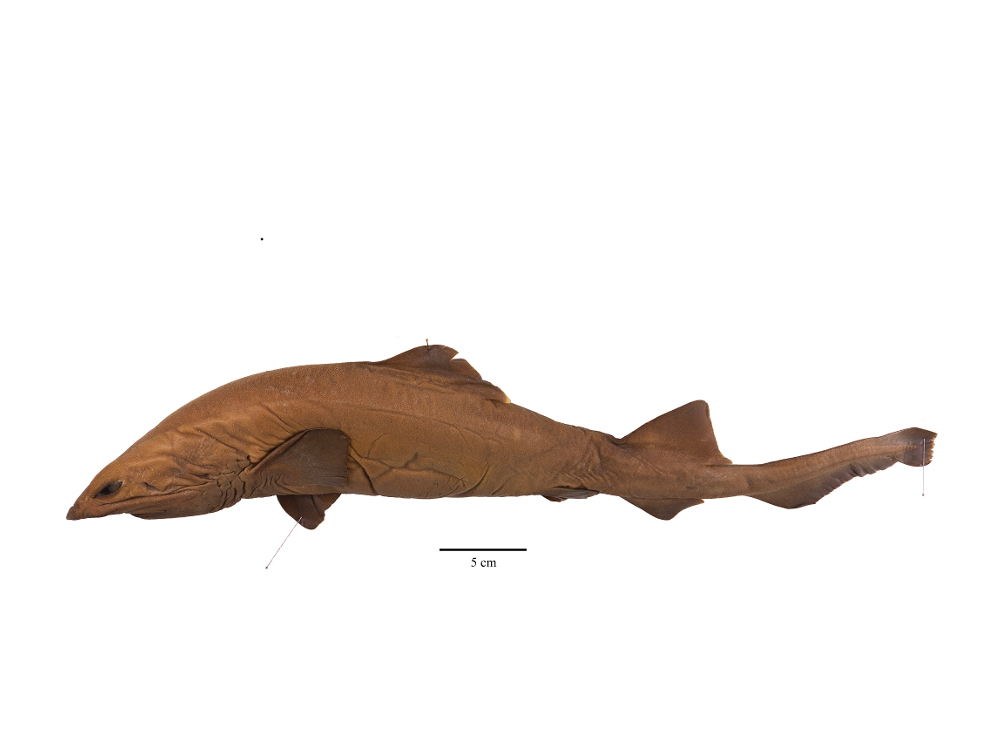 
Short Description
Planonasus parini is the only described member of deep-water pseudotriakid genus Planonasus. It is characterized by a soft, rather deep, and stout to slender and elongated body and a long head; the snout is moderately long, bell-shaped and flattened; the spiracles are large and oriented nearly vertically; the mouth is very large and angular; each jaw has about 110-120 tooth rows, the upper teeth are mostly tri- to pentacuspidate, whereas the lower teeth are mostly comb-like; the labial furrows and the anterior nasal flaps are short, the internarial space is broad; the entire roof of mouth is densely set with oral papillae of distinct size; the first dorsal fin forms a long and low triangle with rounded upper and narrowly pointed rear apex, its base is situated totally in front of pelvic-fin base; the second dorsal fin is much higher than first dorsal fin and forms an uneven triangle with narrowly rounded upper apex, its origin is over pelvic-fin insertions; no interdorsal ridge is present; the anal fin is small and low, its origin is behind that of second dorsal fin; a precaudal pit is not present; the caudal peduncle is relatively short and the axis is raised upwards; the dorsal caudal margin is short, not undulated, and with a keel of somewhat enlarged denticles at front edge. The coloration is plain dusky with fins and ventral snout somewhat darker and with free rear tip of first dorsal fin marked white. Planonasus differs from the two other pseudotriakid genera Gollum and Pseudotriakis by the presence of oral papillae, the absence of nicitating eyelids, a longer head, an intermediate prenarial snout length, an intermediate number of tooth rows per jaw, a first dorsal fin of intermediate height and length and with white free rear tip, a caudal peduncle of intermediate length, and fewer vertebrae.


Biology
The biology of Planonasus parini is unknown. However, based on the soft fins, skin, and musculature, the species is thought to be a sluggish and inactive shark of nearly neutral buoyancy such as Pseudotriakis microdon. The shape of the caudal fin and the moderately elongated body form are typical for slow-swimming sharks that live near the bottom. Planonasus parini might be yolk-sac viviparous and oophagous like Pseudotriakis microdon and Gollum attenuatus. No information is available about the feeding habits of Planonasus parini. However, other pseudotriakids feed predominantly on bony fishes, sharks, molluscs, and crustaceans.


Size / Weight / Age
Planonasus parini is a small shark species that reaches at least 534 mm TL. The smallest known specimen is a juvenile male of 339 mm TL. The largest known specimen of 534 mm TL is a female that is probably immature or at most adolescent due to its small and compact ovaries. A maturing size of 490 to 560 mm TL is specified for a probably closely related, undescribed pseudotriakid species (Compagno et al. 2005 [534]).


Habitat
bathydemersal; marine; all three specimens were collected from the insular slope at depths between 560 and 1120 m.