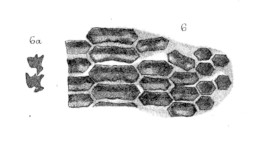 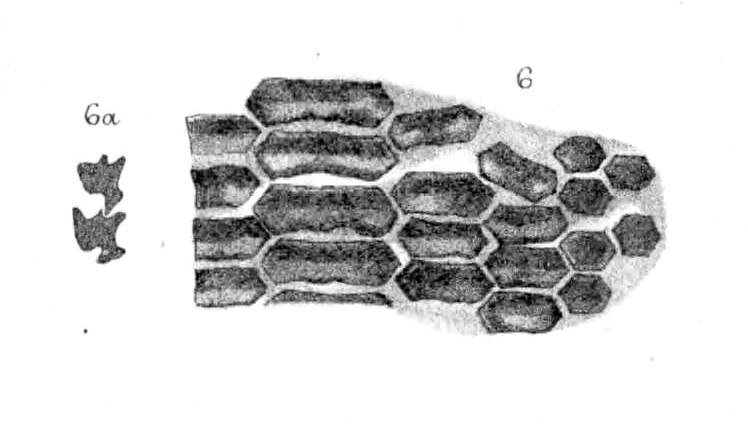 
Description
Original description of Woodward, 1889 [2593]: Rhinoptera daviesii, sp. nov.
Type. Portion of dentition (PI. III. figs. 6, 6 a); British Museum.
Teeth transversely channelled, arranged in nine antero-posterior series. Each tooth of the median row is about four times as broad as long; the teeth of the first and second lateral rows are also much transversely elongated, being respectively about three and two-and-a-half times as broad as long; the teeth of the two outer rows are slightly broader than long.
Form. g Loc. London Clay (Lower Eocene): Isle of Sheppey.
P. 1514:. Type specimen, generically determined by Mr. William Davies. The fossil consists of a large portion of the dentition with parts of the pterygo-quadrate and mandibular cartilages, embedded in hard clay. The teeth of one jaw are much scattered and displaced, but those of the other are scarcely disturbed, being shown in transverse section surrounding the cartilage, and more than half exposed from above. The upper aspect of the dentition, as far as preserved, is shown of the natural size in PI. III. fig. 6; the crowns of the teeth have the appearance of being channelled in the direction of their long axes, and they exhibit a curious mode of interlocking antero-posteriorly, well seen in the transverse fracture (PI. III. fig. 6 a). The dental crown is thin and its lower portion is produced into a projecting ridge anteriorly, which fits into a corresponding groove upon the posterior face of the tooth immediately in front, and is firmly held by a email projecting ledge apparently from the root of that tooth. Such an arrangement has already been described by Agassiz in R. studeri (Poiss. Foss. vol IIl. p. 333, pl. R. fig. 4). The root exhibits the usual antero-posterior grooves and ridges.