Short Description
Original Diagnosis after GARMAN, 1913 [895]: Snout short, longer than the mouth, broadly rounded at the end. Nostrils nearer to the mouth than to the end of the snout. Anterior nasal valves broad, reaching the mouth, narrowly separated from one another at their median attachment; posterior valves narrow, cirroid. A labial fold on the lower jaw, extending half way to the symphysis. Upper lip closing outside of the lower at the angles. Eye medium ; lower lid closing inside the upper. Teeth very small, with three to five cusps, median longest; six rows at the symphysis of the lower jaws of much smaller teeth. Spiracle small, close to the angle of the eye. Gill openings moderate, anterior widest, hindmost smaller and above the pectoral. Dorsal fins small, first larger and originating a short distance behind the ends of the bases of the ventrals; origin of the second dorsal at the end of the base of the anal. Anal base twice the length of the base of the first dorsal, longer than its own distance from the caudal. Subcaudal short, its basal length nearly one and one half times that of the anal. Hack and fins with diffused or indefinite spots and blotches of brown varying greatly in depth of color, especially toward the back, where they are darker more or less fused and intermixed with others of white. Description from a female of 17 inches, from the Adriatic, and from a fully mature male of 131 inches, from Nice. Distinguished from Scyliorhinus caniculus by the positions of the dorsals and by the markings, and from S. stellaris by the positions of the dorsals, the markings, and a narrower separation of the nasal valves on the internarial space at the mouth. It is the smaller southern race of S. caniculus. Mediterranean Sea and Atlantic coasts of Europe.


Distribution
Adriatic and Mediterranean Seas, along the continental shelves of Croatia, Greece, Tunisia and Argelia [27296] 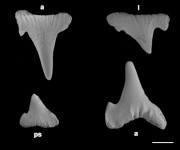