Many thanks to Fabiano Gaffuri  for the images of Rhizoprionodon lalandii, e.g.:

Please send your images to shark-references!

for the updated versions of the host-parasites list please use the species description (one update/week),

Please send your publications about parasites of elasmobranchs to: juergen.pollerspoeck@shark-references.com

Many thanks for sending missing papers:

In an effort to alleviate Olympic withdrawal, I thought this would be a good time to update you on our research and conservation successes in Mozambique!  For a start, I wanted to send you an introduction to our latest scientific paper:

Can photography save sharks?

Some would view the prospect of meeting a shark underwater with horror. Divers though, who regularly see sharks and rays in their natural habitat, travel far and wide to seek them out. Biologists are now developing partnerships with these 'shark paparazzi' to get fascinating insights into the behaviour of these misunderstood fishes.

When I first started work on whale sharks, my main problem was telling them apart. Luckily whale sharks, like other animals such as leopards, penguins and salmon, have spots that are unique to each individual - the equivalent of a human fingerprint.

On whale sharks we photograph the area on either flank, just behind the gills. Back on land, we can upload these images to the ECOCEAN Global Whale Shark Database (www.whaleshark.org) and, following a quick scan, find out who our shark is and where it has come from.


By keeping tabs on individual sharks we can learn their favourite places, preferred foods, where they go and even who their friends are. We can use this information to create effective conservation measures. The challenge has been that, sadly, even we marine biologists can't spend all our time underwater.

Happily though, we have help. As more people explore the ocean, camera in hand, we're learning more about wide-ranging species like whale sharks and manta rays. Over 3000 submitters to the global whale shark database have, between them, identified over 3500 individual sharks from 46 countries.

Several individual whale sharks have been sighted thousands of kilometres apart, giving us important insight into the migratory lives of these gentle giants. One of 'our' Mozambican sharks has now been sighted in Mozambique, South Africa and again back in Mozambique (you can see for yourself here) - a round-trip of over 2000 km!

The success of this system on whale sharks, which has enabled global collaborative projects between research groups, has now spawned an equivalent database for manta rays at www.mantamatcher.org. An image-matching algorithm for identifying individual rays has just gone live, which will greatly assist scientists currently sifting through thousands of images by hand.

Andrea Marshall and myself from the Marine Megafauna Foundation, along with several of our colleagues, have been using photography to further our research for several years now. We thought that this was an opportune time to review its use in scientific studies, share our experiences, and point to some of the most promising developments.

Using a laser system to measure a whale shark in Qatar One of these advances is the coupling of cameras with measurement devices, such as the parallel laser system shown in use above. By monitoring the length and growth of individual sharks we can get great insights into pregnancy, lifespan and even social heirarchies.  Even deep-water sharks are starting to share their secrets through the use of remote-operated vehicles and baited video systems. Camera traps, which have revolutionised the study of rare and shy species on land, are likely to be in use underwater soon as well. The possibilities really are only limited by our imaginations.

Its an exciting time to be a field biologist!

If you'd like to read the full scientific publication, you can download it here. This work was supported by Casa Barry Beach Lodge, Ocean Revolution and our lovely individual supporters.

Our work was recently featured in an article on Mozambique in The Australian newspaper.

For those of you who would like to name your own Mozambican whale shark (and track it's movements using the Global Whale Shark Database), please just reply to this email for more information. Similarly, if you'd like to support our whale shark research and conservation work (which would be hugely appreciated) you can either make a donation directly or contact me for more information.

I'll be sending out more regular updates from now on. Apologies if you've received this email in error - there's an unsuscribe button below if this is the case. Sorry about that. Thanks to all of you for your support, and I look forward to updating you again soon!

The 16th EEA Annual Scientific Conference will be held in Milan, Italy from 22-25 November 2012

The meeting is hosted by the Italian Science Group on Chondrichthyan Fishes (GRIS) of the Italian Society for Marine Biology (SIBM) at the Department of Biology of the University of Milan.

Invited are contributions on all aspects of chondrichthyan research. Additionally, there will be a workshop on the role of elasmobranchs in the EU Marine Strategy Framework Directive (MSFD) taking place as a satellite event prior to the EEA scientific conference on 21 November 2012.

Deadline for abstract submission and registration is 30 September 2012 .

Questions and submission should go to: eulasmo2012@gmail.com

Four new skates of the genus Notoraja Ishiyama, 1958 are described from the rarely accessed, deep waters off New Caledonia, Vanuatu and Fiji islands, and the Norfolk Ridge. Three of these (N. alisae n. sp., N. longiventralis n. sp. and N. fijiensis n. sp.) are “velcro skates” which are characterised by their velvety dorsal and ventral surfaces, covered with fine denticles. Although similar in shape, they differ by their colour pattern, dermal armature, development of the lateral tail folds, and size of the pelvic-fin anterior lobe and nasal curtain. The description of the fourth species, Notoraja inusitata n. sp., is based on a juvenile male exhibiting some unusual features resembling those of other skate genera.

The new shark species came from a remote location that took a week of boat travel across open ocean to reach, the isolation making it a poorly studied area that was ripe for discoveries.  “Sharks haven’t really been explored as much as we think,” said Clerkin.  Dr. Ebert suggests it’s this lack of basic information about sharks that makes these new species so important.  “White sharks are protected in North America and in many places through the world, while these new species aren’t even known and therefore can’t be protected,” said Dr. Ebert.  New discoveries like Clerkin’s are critical, therefore, to keep shark species such as these from falling under the radar.

Clerkin will be taking more than eighty-six measurements and collecting genetic data from each of the sharks to confirm that they are, in fact, new species.  He will then take to the exciting task of naming them, a rare opportunity for such a young researcher.   Clerkin credits much of his newfound success to Moss Landing Marine Laboratories.  “ The Pacific Shark Research Center at Moss Landing Marine Labs has great opportunities for students to collaborate with a network of international organizations and researchers,” Clerkin said.  “The trip was very rewarding for me, and I’m very grateful to have had the experience.” 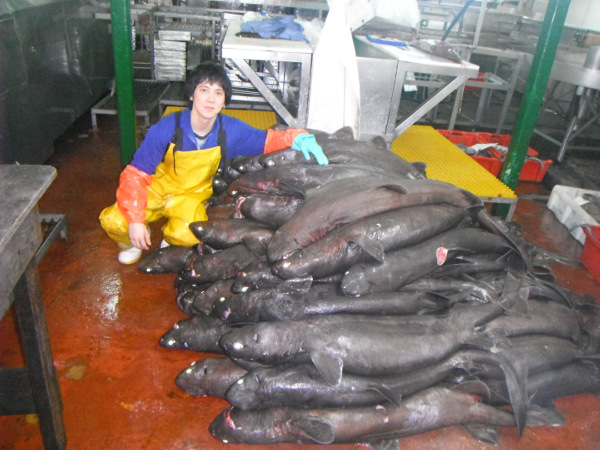 "This is a pile of Kitefin sharks. Known to be solitary hunters this group of 70plus Kitefin sharks came up in the same tow. This leads me to believe there are some aspects of their behavior that we do not fully understand." 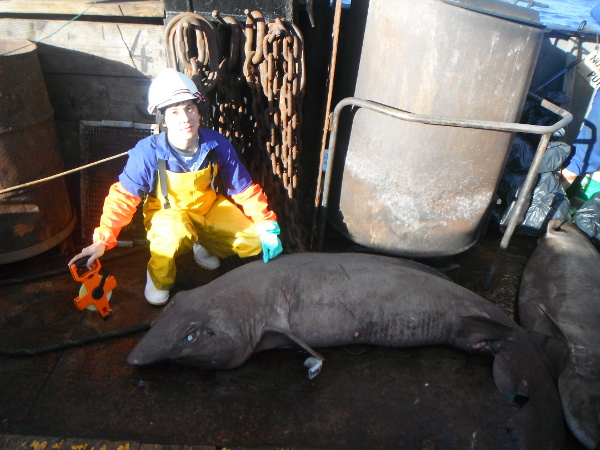 "This is a “False Catshark” (Pseudotriakidae microdon). They are considered very rare. We got a number of them on the ship which leads me to question if they are actually rare or if they just live in obscure locations at great depths." 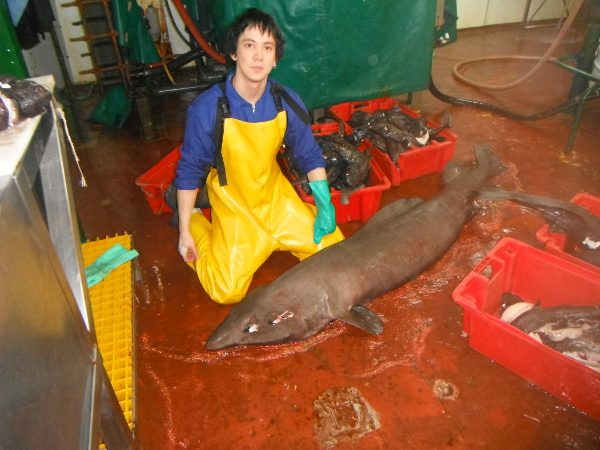 "Here is another False Catshark. I took data in the factory. There is little known about this rare shark."

Three shark species once found in the central Pacific Ocean are now missing.

The remains of several new toothy shark species, with at least three dating to 270 million years ago, are found in the desert state.

This tooth belonged to a preshistoric shark species found in Arizona -- Kaibabvenator swiftae. Click to enlarge this image.  David Elliott

The remains of several new toothy shark species, with at least three dating to 270 million years ago, have been unearthed in Arizona, according to a new study.

The research, published in the latest issue of Historical Biology, suggests that Arizona was home to the most diverse collection of sharks in the world during the pre-dinosaur Middle Permian era. The researchers have discovered many other new shark species from the area, with papers in the works to document them.