Overall, dignathic heterodonty can be noted, in that upper jaw teeth are generally smaller in size compared to their lower jaw counterparts, and that upper jaw teeth have a distinct convex main cusp whereas this feature is reduced in lower jaw teeth. Monognathic heterodonty is present since median teeth are symmetrical, and asymmetry increases towards the posterior and commissural tooth files. Lateral and posterior teeth are more elongated and often lose the presence of a distinct uvula. Furthermore, median, anterior, and anterolateral tooth files show lingually inclined distal and mesial crown faces (Plate 3.4C/E), whereas more posterior and commissural teeth are more elongated and lose this feature.

Median teeth in the upper- and lower jaw are symmetrical in appearance. Lower jaw teeth are generally larger in size compared to those of the upper jaw. These teeth have a well-developed median uvula on the lingual crown face. In this tooth position, the uvula is rounded and bulbous. From an apical point of view, the distal parts of the crown are lingually inclined, hence these teeth are somewhat comparable to female rhinobatoid teeth. The crown has a scalloped appearance from the same viewpoint. A transverse crest is present and develops in a distinct main cusp in upper jaw teeth. The cusp is less pronounced in lower jaw teeth. In anterior tooth files, the asymmetry increases. In upper jaw anterior teeth, the main cusp is well established and distally inclined. A distal heel is present.

In these tooth positions, asymmetry increases even further and teeth become more elongated towards the distal part of the jaw. In upper anterolateral teeth, the crown develops a distinct main cusp, as well as a distal heel. The main cusp has a convex appearance mesio-distally. The transition of the apex into the distal heel is marked by an acute angle. In lower jaw teeth the cusp is less pronounced. A median uvula is present on the lingual crown face in teeth of both the upper- and lower jaw. This becomes less pronounced in more lateral and posterior tooth files. Furthermore, KBIN 27206, the only Mustelus punctulatus tooth available for SEM photography (Plate 3.4F), shows two types of crown ornamentation. Distinct, widely spaced vertical ridges are present on the lingual crown face, where they reach halfway towards the apex. These ridges develop irregularities on the mesial and distal crown extremities. On the labial side, these ridges are only present on the basal part of the crown. Reticulate pitting is omnipresent on the basal lingual crown face and less pronounced on the labial side. The basal parts of the marginal lingual crown faces are lobed, due to the presence of several deep notches, caused by the distal and mesial extremities of the tooth being lingually inclined. This gives these teeth a bent appearance, especially visible on the root from a basal viewpoint (Plate 3.4C). The root is holaulacorhizid and shows a distinct nutrient groove. A central foramen could not be observed. Multiple foramina are present on the lingual, labial and basal faces of both root lobes. 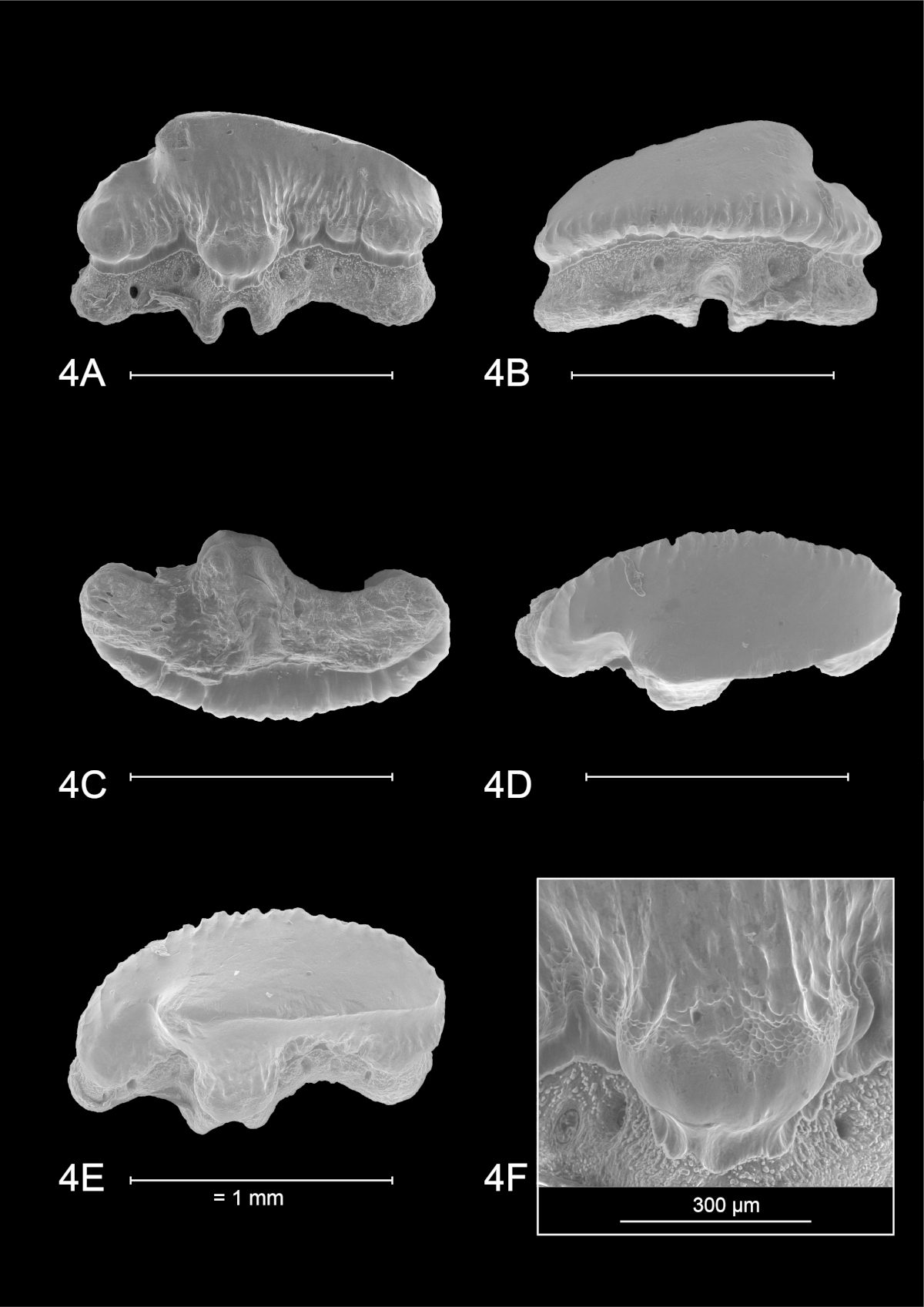